Be different and conquer the market

It may looks like an obvious statement saying that the companies that have different attitudes will get marketing advantages. However, have you ever tought about how many different strategies your company could use, but does not, simply because there is a pattern known as the most appropriate? Through a well done planning, which involves a lot of research, you can discover new sales strategies, which may represent a significant change.

Freek Vermeulen, associate professor at the London Business School, made a statement to the Harvard Business Review, describing his experience in the British newspaper The Guardian, and how it taught him about what he calls management myths. What he seen in a period with the company, may illustrate how some inefficient and outdated ideas persist and thereby make the progress slower in an industry.

When he was hired by The Guardian, around 2003, Vermeulen thought that if the newspapers were printed on smaller paper sheets, thei would have a lower cost, and suggested that if this was implemented, it would also be better for the readers. The answer was no. They said that the quality newspapers had always been printed on larger paper sheets, and customers wouldn’t like if they were made in any other way. Shortly after, newspapers like The Independent and The Times, began to reduce the size of theyr paper sheets, and it had brought good results.

Vermeulen then began to research about that, and found out that the origin of the largest newspapers sheet, comes from 1712, when the British government started to charge taxes calculated by the number of pages of a newspaper. This lasted until 1855, but the newspaper continued to be printed in the same way, simply because they thought it was the right way to do it.

This is a case that clearly shows how some stereotypes can avoid a company progress. Always research and work with concrete information. It will give you a huge advantage over the competition. Create an efficient planning and conquer your market share. Regardless on what is your business’ segment, Runrun.it can help you to do this. The software works on a system that manage projects and tasks, which can make the work in your company a lot more profitable.

The video with the full statement from Freek Vermeulen is available here. 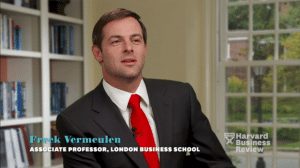