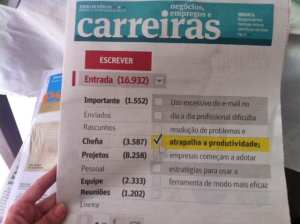 A month and a half of work: this was the time that a team of pharmaceutical Boehringer Ingelheim calculates winning by reducing the volume of emails sent. The number dropped from 9,515 per person in 2011 to 6656 in 2012.

“We reduced in 2859 the number of emails per employee. If you count five minutes for each message, this represents a month and a half of work per year,” says Fabio Rodrigues, 38, manager of the company responsible for the initiative, motivated by the fact that the team had become a “e-mail slave”

That was part of an article by Folha de S.Paulo, Brazilian largest newspaper. This is exactly the problem we are solving with Runrun.it. Using it, all communications related to a task, project or customer are logged in a specific ‘time-line’, just like the one you have on Facebook. You can also check very quickly all the updates on the tasks that have been opened by you, to you or those you are just following. This avoids the time lost searching, sorting and checking if an email actually do demand any action from you.

It is very common to receive feedback of a 60% decrease in the number of emails among runrun.it users. You should check it at http://runrun.it

And read the full story in Folha: the_need_to_reduce_email